Fitch owned several ships, including the schooner “Phillis,” that were used in the Atlantic slave trade (the “Triangular Trade”.) Phillis Wheatley, who wrote the first volume of poetry to be published by an African American, was seized from the Senegambia region as a child in the mid-18th Century and transported on Fitch’s ship “Phillis,” after which she was named.

The cargos of these ships included slaves, rum, molasses, and various other items. Rum and molasses from Medford were taken to West Africa, where they were used to buy African slaves. The slaves were then transported to the Americas and sold.

Excerpts from Letters to his Ship Captains

Fitch’s captains sailed from Boston to West Africa carrying goods to exchange for slaves. In many cases, such as this one, rum was the currency used.

My orders are that you Embrace the first favourable opportunity & proceed to the Coast of Affrica, Toutching upon the Windward Coast. where I would have you dispose of your Cargo if Possible & purchase your Slaves, even soppose you give One Hundred & Fifty Gallons Per head…for Prime Slaves… –Timothy Fitch

Fitch was very particular about the type of slave he wished to be purchased for him. Young men were most preferred because of their strength and the higher price they commanded when sold in the New World.

…you are not to take any Children & Especially Girls, if you Can Avoid it by any means, + as fiew Woman as Possible… but as many Prime Young Men Boys as you Can get from 14 to 20 Years of Age. Take no Slave on Board that has the Least defect, or Sickly as you will be Early & have a Choice well assorted… –Timothy Fitch

Captured Africans resisted their enslavement at every opportunity, and insurgency was common on slave ships. Many slaves also sank into despair and refused to eat. Captains attempted to counter this by forcing slaves to dance on deck.

…be Constantly Upon your Gard Night & Day & Keep good Watch that you May not be Cutt of by Your Own Slaves… Let your Slaves be well Lookd after properly & Carefully Tended, Kept in Action by Playing Upon Deck…& by All Means Keep up Thare Spirretts. –Timothy Fitch

The type of slave purchased in Africa was an important consideration. Young adult males were seen to be the most suitable for labor and fetched the highest price. The quote from this letter also clearly shows the involvement of the Northern colonies.

Now in regard to your purchasing Slaves, you’ll Observe to get a few Girl Slaves as Possible & as many Prime Boys as you can after your Completely Slaved you are to Come off & if Early you may fall in to the Southward & go into Philadelphia or York or Jerseys, where I hear there is no Duty on Slaves… –Timothy Fitch

On arrival in the New World, the slaves were made to look healthy and fit, in order to sell them for the highest price. This was of particular consideration if they were older or in bad shape after the voyage.

Fitch was well aware of the potential dangers of carrying a cargo of slaves.

As you have had often the Care of a Number of Slaves, so I think is needless to say much upon that head in Regard to keeping them well secured & a Constant Watch over them & att the same time you’ll consider that many Vessells have been cutt off through Neglect or thinking themselves Secure. –Timothy Fitch 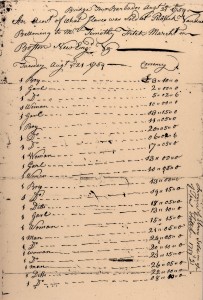 Excerpts and images are from original letters written by Timothy Fitch. From the collection of the Medford Historical Society.