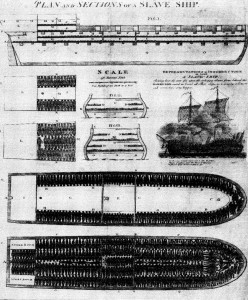 The Middle Passage was a time of extended suffering for enslaved peoples. Many ships’ voyages lasted much longer than two or three months. The James, a ship commissioned by the Royal African Company, departed from England on April 5, 1675 and did not arrive in Barbados until May 21. 1676.

Africans were often kept nearly naked for the duration of each journey, segregated according to sex, and chained together to prevent uprisings and escape attempts. Malnutrition, “tight packing”, and diseases such as dysentery and smallpox plagued captive slaves and caused high mortality rates aboard ships.

“…there is put aboard your Pinck Supply 30 paire of shackles and boults for such of your negers as are rebellious and we pray you be veary careful! to keepe them under and let them have their food in due season that they ryse not against you. as they have done in other ships.”

Instructions given to Bartholomew Hayward by the Guinea Company in 1651, as quoted in Michael A. Gomez. Exchanging Our Country Marks. p. 158.

“Typically, there were two levels [of enslaved people], one above the other, on either side of the ship, with a central passageway. They had about 18 inches of head room, less than two feet head room. They couldn’t sit. And because they were manacled, they couldn’t really change position very easily at all without hurting themselves or their companions.” –Barry Unsworth, author of The Sacred Hunger.

“What moved in the Atlantic in these centuries was predominantly slaves, the output of slaves, the inputs to slave societies, and the goods and services purchased with the earnings on slave products.” –Barbara Solow. Slavery and the Rise of the Atlantic System, p. 1.