These pages are excerpts from Medford on the Mystic, written by the Reverands Carl and Alan Seaburg, a book sponsored by the Medford Historical Society and the Medford Veterans of Foreign Wars, presented to the people of Medford in April, 1980.

Medford is rich in history. During the 17th, 18th and 19th centuries, Medford grew from a small settlement of landed gentry to a middle-class streetcar suburb. Read about the first three centuries of Medford: A Peculiar Plantation, A Quiet Country Town, The Emerging City, Your House in the Streetcar Suburb

Brick from the Medford brickyards went up the Middlesex Canal and helped to build mills in Lowell and New Hampshire. Who knows how many private houses up-country were built with these same bricks which came out of Medford’s claypits? Making Bricks in Medford

In the nineteenth century the Mystic River was tidal and flowed unchecked to the ocean. Thatcher Magoun, a Pembroke man, saw the possibilities and started the first ship yard. Medford-Built Sailing Ships, Old Ships and Ship Building Days of Medford

Although most traces of the Middlesex Canal have long since been erased or built over, we in Medford have not forgotten the ingenuity and industry of our forebears in helping to build this canal. The Middlesex Canal 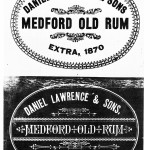 Daniel Lawrence & Sons made “The Best Rum in the States.” Medford Rum