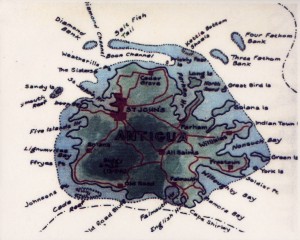 Isaac Royall, who arrived in Medford from Antigua in 1737, owned the largest number of slaves in the area.

Colonel Royall petitioned the General Court on December 7, 1737, to remit the duty on his slaves as they were to be his personal property (they would not be sold). The duty was four pounds a head. This petition was laid on the table and rests there yet. –Brooks, History of Medford.

All 27 of the Royall House slaves were brought to Medford from Antigua, an island in the West Indies that was a prominent hub of the “Triangular Trade.” By the middle of the 1700s more than 150 cane- processing windmills, each associated with a sizeable slave-owning sugar plantation, existed on the island.

On the sugar plantations of Antigua in the seventeenth and eighteenth centuries, slaves represented the chief investment of proprietors, who organized their work routines with profit foremost in mind. So long as it was possible to obtain replacements for slaves who were no longer productive, Antigua planters paid little attention to preserving the health and lives of their work force – up until the very end of the eighteenth century, when they realized that access to slaves from Africa would be terminated. –David B. Gaspar. Sugar Cultivation and Slave Life in Antigua Before 1800 In Ira Berlilin (ed.) Cultivation and Culture: Labor and the Shipping of Slave Life in the Americas. p. 123

Slaves on the sugar plantations labored in the fields, planting, harvesting, and grinding the cane. Slave boilermen held a slightly higher social status than field hands due to the increased amount of skill involved in their work, but accidents occurred frequently.

Africans arrived in Antigua continuously, disguising the high mortality and low birth rates that existed due to the grueling nature of the slave labor. The regular occurrence of slave shortages also made life difficult, increasing the responsibilities of each individual slave.

By the second decade of the eighteenth century, Antigua was the leading sugar colony among the British Leewards, and the island’s Black majority — which dated from the seventeenth century — towered from the white population…The steady growth of a Black majority was achieved through continuous importations of Africans, which concealed the impact of persistent heavy mortality and low birthrate caused by the heavy burdens of life and labor under slavery. –David B. Gaspar. Sugar Cultivation and Slave Life in Antigua Before 1800 In Ira Berlilin (ed.) Cultivation and Culture: Labor and the Shipping of Slave Life in the Americas. p. 123