You are here: Home › Medford History › From Africa To Medford: The Untold Story › Enslaved People in Medford 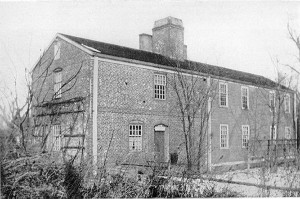 The Slave Census of 1754 notes that “there were in Medford twenty-seven male and seven female slaves and fifteen Free Blacks; total 49 blacks in Medford.”

The first slaves arrived on February 26, 1638 from Tourtugas, West Indies on a ship commanded by Captain William Pierce. On his return from Toutugas, he brought home a cargo of cotton, tobacco, salt and Negroes. –Brooks. History of Medford (1855).

Massachusetts was the first American colony to formally sanction human bondage in its ironically named Body of Liberties in 1641, making slavery in Massachusetts longer-lived than in Georgia, which legalized the institution only in the 1750s.

The conduct of Blacks in Medford was regulated by a resolution passed at a town meeting in Medford on February 11th, 1744/5:

To know the mind of the town whether they will pass any vote reflecting the Negro servants being out at unreasonable times of the night. The person that meets or finds him from home, the Negro’s name shall be returnt to the Justice the next morning and defier the Justice to send for ye said Negro’s Master and order ye Negro to be whipped in ye market place not exceeding ten stripes unless the said Master gives satisfaction voted in the affirmative.

The Isaac Royall family lived in the Royall House from 1737-1775. Isaac Royall, Sr. was a prosperous merchant who amassed great wealth in Antigua in the early 1700s, running a sugar plantation and trading in enslaved property and rum. He moved to Medford with his family and 27 enslaved human beings in 1734. Learn more at the Royall House & Slave Quarters website.

Isaac Royall owned the largest number of enslaved people in the area.

After Hours for the Royall House Slaves

The Royall House Slave Quarters is the only free-standing building of its kind north of the Mason-Dixon Line.

An Act to prevent Disorders in the Night

WHEREAS great Disorders, Insolence and Burglaries arer oftimes raised and committed in the Night-Time by Indians, Negro and Molatto Servants and Slaves, to the Disquiet and Hurt of Her Majesty’s good subjects:

Be it enacted by His Excellency the Governour, Council and Representatives, in General Court assembled, and by the Authority of the same, That no Indian, Negro or Molatto Servant or Slave, may presume to be absent from the Families whereto they respectively belong, or be found Abroad in the Night- Time after nine a Clock; unless it be upon some Errand for their respective Masters or Owners.