You are here: Home › Medford History › From Africa To Medford: The Untold Story › Prince Hall 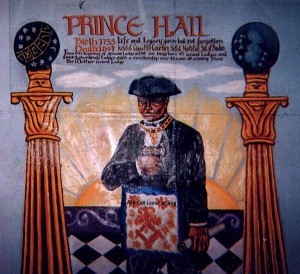 Prince Hall’s life history has been the subject of debate. This image from the Grand Hall Lodge in Dorchester, MA states he was born in 1735, other sources state 1738, and yet others state he was born on September 12, 1748 in Bridgetown, Barbados to Thomas Prince Hall, an Englishmen, and a free Colored woman of French descent. In Barbados, the Hall family was a very well respected family and its members were known as “pious persons of excellent character.”

At the age of twelve, Prince Hall became a leather apprentice under his father, where he made great advancements in the trade. Prince Hall, in addition to working as an apprentice, aspired to visit America. Though discouraged by his parents, young Prince never gave up on coming to America.

In February 1765, he heard that a vessel in port was “bound for America”, and spoke to the captain offering to work his passage. On March 1765, the vessel arrived in Boston, Massachusetts.

Prince Hall was seventeen years old when he arrived in Boston. He lived in Medford and worked for many years, saving money. He was briefly married to Sara Ritchie, a slave who died shortly after their marriage. By age twenty-five he was able to buy real estate and was eligible to vote. Prince joined the Continental Army and was “one of a few Blacks who fought at the battle of Bunker Hill.”

Later on, after several years of study, Prince Hall became a minister in the African Methodist Episcopal Church in Cambridge, Massachusetts. He was known for often using his pulpit to preach about “messages of the abolition of slavery”.

He was also known for his Lodge of Freemasons. As master of the African Masonic Lodge, Prince Hall used his status to formulate and execute movements toward the political advancement and liberation of slaves. He is most notably linked to the drafting of Belinda Royall’s petition addressing the General Court in 1783. In addition, he drafted the 1777 petition for a Gradual Process of Emancipation for slaves and a 1787 petition For A Return to Africa Movement, as well as several others.

After many years of service, Prince Hall died on December 26, 1827. He was buried in a cemetery overlooking the Charlstown naval yard in Boston’s North End.

The Founding of the First African Masonic Lodge 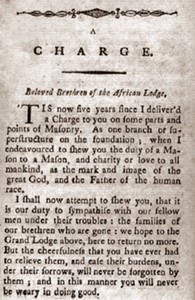 First Page of
A Charge Delivered to the African Lodge
June 24, 1797
at Menotomy
Published by the Desires of the Members of said Lodge, 1797

In theory, the ideals of Freemasonry sought to unite men regardless of beliefs, race, class and skills. It was a universal brotherhood that saw men as equal and provided mobility and opportunities for them within society. These were essentially the values of Freemasons worldwide.

Prince Hall however, faced discrimination and was not allowed to join the White Masonic lodges in America. “Even though these Masons preached brotherhood, they insisted on keeping Blacks out of their lodges”. In response to their refusal, Prince Hall turned to the British Masons stationed in America.

The creation of the first African Masonic Lodge came about due to the unrelenting efforts of Prince Hall and these fourteen others who were taking the “initial steps to form America’s first Black institution”.

The remarkable efforts of Prince Hall not only established the first Black institution in the United States but also established a firm foundation on which other Blacks in this country could build. Prince Hall used Freemasonry as a device to help his fellow brothers and sisters in the struggle for equality, freedom and advancement.

Prince Hall’s petition writing for social justice began in 1777 with his request to the General Court to give slaves their freedom, a right to every person. In this petition, of January 13, 1777, Prince Hall called to the government to be held accountable for ripping many Africans out of their homeland.

He challenged the government to stand by the principles it stands for, “a natural and unalienable right to that freedom, which the great parent of the Universe hath bestowed equally on all Mankind.” This petition calls for the freedom of all children, as well as other slaves not free, born in a land of liberty to receive their freedom at the age of 21. Through his writing he wishes to correct the inconsistencies in the State, and feels compelled to assure that justice is attained for all.

The Father of Civil Rights 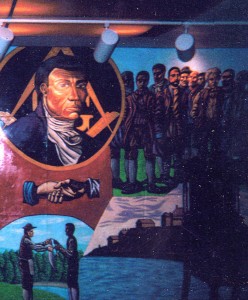 An aspect of Prince Hall’s petition writing that is normally attributed to men like Marcus Garvey was the “Return to Africa Petition.” Long before the Harlem Renaissance, Black Panther movement, and Malcolm X came Prince Hall in colonial Medford, Massachusetts. There were no other black thinkers like him at this time, and the abolitionist movement had not yet quite taken root in New England. Prince Hall was writing petitions for freedom and retribution long before Frederick Douglass began telling his story. The most important thing is that he was here in Medford, while New England closed its eyes to slavery, and the injustice created in the system.

Prince Hall had to contend with enormous obstacles, and before any notion of civil rights became collective thought he was pioneering on a call to have some blacks from Massachusetts return to Africa. This petition may have fell upon deaf ears in the House of Representatives but it is a trumpet and banner for all who seek justice on an unequal playing field.

On October 17, 1787, he with others, sent a petition to the Senate and House of Representatives of Massachusetts urging that ‘means be provided for the education of colored people.’ He wrote that blacks were taxed as whites were and that they had not been backward in paying their proportionate share of the total taxation. He declared that they were willing to pay their ‘equal part’ but that they were denied the privileges of education in many cases, that there had been oversight in ‘the education of our children’…

In his efforts to obtain freedom for slaves, Prince Hall’s agenda also included reparations. He is believed to have helped Belinda Royall write her petition of February 14, 1783. With Prince Hall’s assistance she became the first and only former slave to receive reparations for all her years of work without compensation. Prince Hall’s contributions as a free black and citizen of Medford had profound influences in his day, and provides later African Americans with the lens to seek justice.

The Petition of a number of Blacks, freemen of this common wealth humbly showed: That your petitioners are justly alarmed at the inhuman and cruel treatment that three of our brethren, free citizens of the town of Boston, lately received. The captain, under pretense that this vessel was in distress on an Island below in this harbour, having got them on board, put them in irons, and carried them off from their wives and children, to be sold as slaves. This being the unhappy state of these poor men. what can your petitioners expect but to be treated in the same manner by these same sort of men? What then are our lives and liberties worth, if they may be taken away in such a cruel and unjust manner… –The Petition of Blacks, January 4, 1787. Massachusetts State Archives

Prince Hall in this petition asks for a gradual, process of emancipation; that those slaves that reach the age of twenty-one be set free. He did not demand that all Blacks in the State be set free at once. Prince Hall fought for the abolition of slavery nearly one hundred years before the qreat black abolitionist Fredrick Douglass began his crusade. Yet today Douglass comes to mind if one is asked to name a famous Black abolitionist. Perhaps with the passage of time, Prince Hall will take his rightful place in American history. This man fought for civil rights for all citizens of Massachusetts. He was born two hundred years before his time. Black people and white people alike have a great deal to learn from his example, both in thought and deed. –Jay Griffin, Afro-Americans in Colonial Medford.</quote]

To be a free Black in colonial Medford meant a daily struggle against racism, the system of slavery, and laws that were oppressive to slaves and free Blacks alike. In his petition of February 27, 1788, Prince Hall called attention to a specific incident concerning the kidnapping of three free black Bostonians. These men were deceived by a Captain Solomon Babson that they would receive work aboard his ship. Instead they were captured and prepared to be sold as slaves in the West Indies.

In the petition Prince Hall asked for the return of these men. and capitalized on their status as free blacks. By bringing attention to the many free blacks taken hostage, and treated with no rights, he caused many to rethink the meaning of freedom. This may have even sent an deeper shock wave through the free black population of Medford. and caused many to think more intently about the need for an unbreakable statute of laws that would protect their rights. — Jay Griffin, “Afro-Americans in Colonial Medford”