You are here: Home › Medford History › From Africa To Medford: The Untold Story › Contributions of Enslaved Peoples in Medford 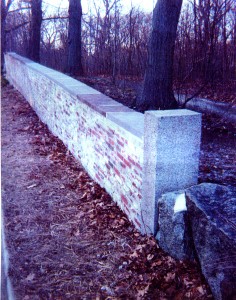 According to William D, Piersen, there was a wide range of skilled and unskilled labor roles filled by northern slaves in addition to agricultural and domestic work.

A suggestive listing of such jobs would include: 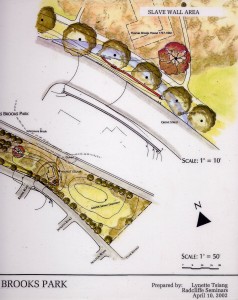 An enslaved man called “Pomp” built this wall–now known as the “slave wall”–on Grove Street in 1765 for slave owner Thomas Brooks. The wall formed part of a decorative entrance to Brooks’ house.

This site was part of the estate of the Brooks family, which was first occupied in 1679 and once included some 400 acres of land. The park behind the slave wall was donated to the City of Medford in 1924 by the Brooks family.

The first Enslaved people from Africa arrived in Medford in February 1638. By 1765 Medford’s population included 49 enslaved peoples, many of whom were descended from those tied to the infamous Transatlantic Slave Trade. A portion of the original wall still stands as a testament to Pomp’s masonry abilities as well as the efforts of the other unsung individuals who made Medford’s prosperity possible.