You are here: Home › Medford History › From Africa To Medford: The Untold Story › The Petition of Belinda Sutton (previously known as Belinda Royall) 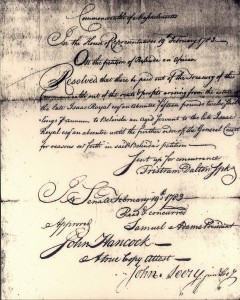 Belinda, a slave in the Royall House, wrote a petition to the Commonwealth of Massachusetts in 1783, requesting an income from the estate of her former owner, Isaac Royall. In her petition she recounted the story of her childhood in the “Rio de Valta” (Volta River), with its “mountains covered with spicy forests.” Her account directs us to the Akosombo and Ho area in eastern Ghana, which provide the only tree-covered hills in the Volta region. This area is home to Ewe-speaking and Akan peoples.

The February 1783 pension awarded to Belinda might be regarded as one of the first cases of reparation for slavery and the slave trade. However, in 2015 with the launch of a comprehensive database of Massachusetts antislavery petitions, scholars have been able to discover that Belinda was persistent in her efforts for a pension and that she endured a history of missed payments forcing Belinda to renew her claim five times over the course of a decade. See more information on these new discoveries at the Royall House & Slave Quarters website. A petition from 1788 where she requested three years’ back pension has her identifying herself as the widow Belinda Sutton.

The Petition of Belinda an Affrican, humbly shews: that seventy years have rolled away, since she on the banks of the Rio de Valta, received her existence – the mountains Covered with spicy forests, the valleys loaded with the richest fruits, spontaneously produced; joined to that happy temperature of air to exclude excess; would have yielded her the most compleat felicity, had not her mind received early impressions of the cruelty of men, whose faces were like the moon, and whose Bows and Arrows were like the thunder and lightning of the Clouds. – The idea of these, the most dreadful of all Enemeies, filled her infant slumbers with horror, and her noontide moments with evil apprehensions! – But her affrighted imagination, in its most alarming extension, never represented the distress equal to what she hath since really experienced – for before she had Twelve years enjoyed the fragrance of her native groves, and e’er she realized, that Europeans placed their happiness in the yellow dust which she carelessly marked with her infant footsteps. – even when she, in a sacred grove, with each hand in that of a tender Parent, was paying her devotions to the great Orisa who made all things – an armed band of white men, driving many of her Countrymen in Chains, ran into the hallowed shade! – could the Tears, the sighs and supplications, bursting from Tortured Parental affliction, have blunted the keen edge of Avarice, she might have been rescued from Agony, which many of her Country’s Children have felt, but which none hath ever described, – in vain she lifted her supplicating voice to an insulted father, and her guiltless hands to a dishonored Deity! She was ravished from the bosom of her Country, from the arms of her friends – while the advanced age of her Parents, rendering them unfit for servitude, cruelly separated her from them forever!

Scenes which her imagination never conceived of, – a floating World – the sporting Monsters of the deep – and the familiar meetings of the Billows and the clouds, stove, but in vain to divert her melancholly attention, from three hundred Affricans in chains, suffering the most excruciating torments; and some of them rejoicing, that the pangs of death came like a balm to their wounds. Once more her eyes were blest with a Continent – but alas! How unlike the Land where she received her being! Here all things appeared unpropitious – she learned to catch the Ideas, marked by the sounds of language only to know that her doom was Slavery, from which death alone was to emancipate her – What did it avail her, that the walls of her Lord were hung with Splendor, and that the dust troden underfoot in her native Country, crowded his Gates with sordid worshipers – the Laws had rendered her incapable of receiving property – and though she was a free moral agent, accountable for her own actions, yet she never had a moment at her own disposal!

Fifty years her faithful hands have been compelled to ignoble servitude for the benefit of an Isaac Royall, until!, as if Nations must be agitated, and the world convulsed for the preservation of the freedom which the Almighty Father intended for all the human Race, the present war was Commenced – The terror of men armed in the Cause of freedom, complelled her master to fly – and to breathe away his Life in a Land, where, Lawlless domination sits enthroned – pouring bloody outrage and cruelty on all who dare to be free.

The face of your Petitioner, is now marked with the furrows of time, and her frame bending under the oppression of years, while she, by the Laws of the Land, is denied the employment of one morsel of that immense wealth, apart whereof hath been accumilated by her own industry, and the whole ugmented by her servitude.

WHEREFORE, casting herself at your feet if your honours, as to a body of men, formed for the extirpation of vassalage, for the reward of Virtue, and the just return of honest industry – she prays, that such allowance may be made her out of the Estate of Colonel Royall, as will prevent her, and her more infirm daughter, from misery in the greatest extreme, and scatter comfort over the short and downward path of their lives. 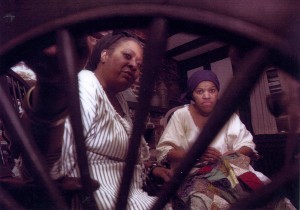 Spinning was one of the tasks performed by female slaves.
Credit to be added

Two parts of Belinda’s account need to be interpreted rather than read literally. First, she wrote that she was captured as a twelve-year-old girl by “an armed band of white men.” In fact, although Europeans sometimes kidnapped Africans on the coast, they were unable to go inland to capture slaves. It was African raiders and warriors from other areas that captured slaves and sold them to European slave traders on the coast in exchange for weapons, ammunition, rum (including New England and Medford rum), and other commodities. By substituting white men as her captors, Belinda (or Prince Hall, the abolitionist who is thought to have helped her) may have been arguing a case by placing moral responsibility where it ultimately belonged: on white Europeans and North Americans who initiated the Atlantic slave trade and profited most from it.

The second part of Belinda’s account of her childhood home that requires interpretation is her statement that she was captured in the sacred grove of “the great Orisa who made all things.” “Orisa” is the term for “deity” among Yoruba speakers far to the east, in present-day Nigeria. Although some Yoruba deities were adopted by people further west, including Ewe- speaking peoples, these people gave deities the name “vodun.” Other Ewe deities are known as “tro” or “trowo.” The term “orisa” did not travel with them, and is unknown in the Volta region. The origin of the name “orisa” is a mystery. It may be that either Belinda or Prince Hall knew people who had been taken from a Yoruba-speaking area. By describing a god “who made all things,” Belinda or Prince Hall may have wished to emphasize that Africans have civilizations and religious ideas that are worthy of white Christian Americans’ respect.