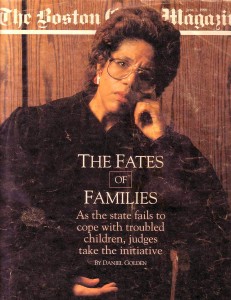 Marie Oliver Jackson was born on August 14, 1947, in the steel mill town of Rankin, Pennsylvania, the eldest of six children. By growing up in Rankin’s multiethnic, multiracial neighborhoods, and by being raised Roman Catholic in a town in which most African American families were Baptist, Jackson learned the importance of diversity in a community. Jackson’s parents taught their children the values of religion, education, and hard work. As a young teenager, Marie Jackson discovered her passion for debating and excelled on her school team. This debate team allowed Jackson to develop skills that she would later use as a judge, such as exploring both sides of an issue and fighting for what she believed in.

Jackson left Rankin to attend Mount Holyoke College in 1965, at the height of the Civil Rights movement and the beginning of the feminist movement. She embraced this time, becoming an activist in her college community. Her activism continued after graduation, when she studied at Harvard Law School and participated in anti-Apartheid protests. This was a time of historical transition, when women and African Americans became a presence at the Law School but were not yet acknowledged as full members of this community.

After receiving her law degree in 1972, Jackson worked at Cambridge-Somerville Legal Services. She moved to West Medford in 1973, and was the first African American to live “across High Street,” on Sagamore Street in the Brooks Estate. Jackson served on the Board of Directors of the West Medford Community Center, and later became President. She became active in the Shiloh Baptist Church, working with the first Black youth association and co-founding the Family Network.

Judge Jackson has worked tirelessly to improve the juvenile justice system in the state of Massachusetts, and was featured for her efforts in a 1990 Boston Magazine article. Jackson has been instrumental in making government agencies more responsible, and is known for her creative sentencing. While she has received numerous awards throughout her career, she takes extraordinary pride in her role as a mother figure: children and family form lifelong themes in Jackson’s life. As she proclaims, “I am a wife, mother, grandmother, friend, Christian, sister. I’m all those things before I’m a judge. I had many of those roles before I was a judge, and I’ll have those roles after I’m a judge.”

Currently, Jackson is the Presiding Justice of the Woburn District Court and lives in the town she now serves.