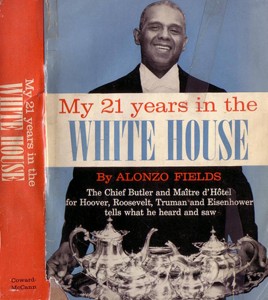 Alonzo Fields was born in 1900, in the all-Black community of Lyles Station, Indiana. His father was the leader of the town’s Colored brass band, and this early musical influence would have a profound impact on Alonzo’s life. He left in 1925 to enroll in Boston’s New England Conservatory of Music, where he would pursue a degree to teach music. During his stay in Boston he had come under the sponsorship of Dr. Samuel Stratton, President of the Massachusetts Institute of Technology. Dr. Stratton’s financial support of Alonzo’s studies made his dream of pursuing a career in music a very real possibility.

Tragically, Dr. Stratton passed away in 1931, leaving Alonzo without a job and without the means to continue with his music. To his good fortune Mrs. Herbert Hoover, upon hearing of Stratton’s death, remembered a young man named “Fields” who had waited on her during her visit to the Stratton household. She called him up and offered him a job as a butler in the White House. Knowing that this was not a chance to pass up, Alonzo packed up his life and moved his family to Washington, D.C., leaving his unrealized dreams to fade away behind him. Little did Alonzo know that this was the start of a prestigious career that would span two decades and four Presidencies.

After serving under President Hoover, Alonzo stayed on with FDR and was at the President’s side throughout the Second World War. During this time he also met and became a confidant of British Prime Minister Winston Churchill. But Harry Truman was, without a doubt, Alonzo’s favorite President. It was Truman who would greet Alonzo every time he saw him. It was Truman whom Alonzo chose to stand beside him in his portrait that hangs in Medford City Hall. It was Truman who treated him not like a servant, but like a man.

After leaving the White House during the Eisenhower administration in 1952, Alonzo moved to West Medford to be with his wife, Edna, who was in and out of the hospital over the next two decades with thirteen operations. She passed away in 1973. During those painful times, Alonzo found solace in writing his memoirs from the extensive notes he had kept during his time at 1600 Pennsylvania Avenue. My 21 Years in the White House was published in 1960 and made him something of a celebrity. Community and church groups began inviting him to come and speak of his experiences. In the late 1970s, he became reacquainted with Mayland McLaughlin, also of West Medford. Having each recently lost their spouses, the two had an immediate connection, and a deep bond formed between them. They married in 1980.

By 1994, Alonzo Fields was dying of leukemia. His good friend Oscar Greene went to visit him in the hospital. During this visit, Alonzo, the man who would never ask for anything from anyone, had one dying wish. He asked Oscar to give the eulogy at his funeral. Moved by the request, Oscar quickly agreed. In the back of his mind, however, he knew how hard it would be to eulogize such a great man. Alonzo had one requirement for his eulogy. He told Oscar, “Don’t talk too long and don’t tell the truth.” Initially taken aback by the abruptness of the request, Oscar soon realized that it was a typical Alonzo gesture. Even on death’s doorstep, Alonzo Fields remained his modest self. He did not want to bother others with a long, dreary eulogy. It was almost as if he did not want people to notice that he was gone. It was just what he had been trained to do as a civil servant in the White House. Be there, ready to help at a moment’s notice, but otherwise just melt away into the background, watching. Always watching.