Although most traces of the canal have long since been erased or built over, we in Medford have not forgotten the ingenuity and industry of our forebears in helping to build this canal. We remember its important contributions to the canals that were later constructed based on the technology pioneered here.

The Medford Historical Society celebrated during the 1996/1997 season one hundred years of preserving the history of Medford. Among many other events marking this special occasion, we sponsored a book recognizing the bicentennial of the Middlesex Canal.

The connections between the Middlesex Canal and Medford are close and deep. The earliest supporters for a canal linking Boston with the Merrimack River were Medford citizens like Andrew, Benjamin, Ebenezer Sr., Ebenezer Jr., and Willis Hall, Samuel Swan Jr., and Jonathan Porter — farmers, merchants, landowners, the prominent worthies of the village. 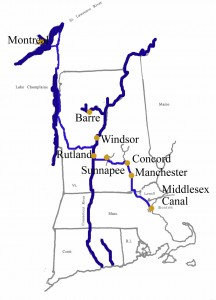 In the beginning, Medford was to be the natural terminus of the canal. Boats and barges would continue down to Boston by the Mystic River. Later, when the canal was extended to Charlestown, the Medford supporters pushed for a direct connection to the river. So the branch canal was built in 1804. This made it possible for lumber from New Hampshire forests to come immediately into the village for the use of the new ship-building industry. This important industry flourished in Medford for a quarter of a century after the passing of the canal.

Brick from the Medford brickyards went up the canal and helped to build mills in Lowell and New Hampshire. Who knows how many private houses up-country were built with these same bricks which came out of Medford’s claypits? Thus the Middlesex Canal played a significant part in Medford’s economic history during the nineteenth century.

So it was altogether fitting that in celebrating our one hundredth year, we should be sponsoring a bicential history of the Middlesex Canal.

Although most traces of the canal have long since been erased or built over, we in Medford have not forgotten the ingenuity and industry of our forebears in helping to build this canal. We remember its important contributions to the canals that were later constructed based on the technology pioneered here. And in reading and looking at the illustrations in this book, perhaps we will recover a sense of the nostalgia and pleasure that our ancestors knew in voyaging on the old canal in the “good old days.”

Although the [Middlesex] canal can be likened to a highway cutting Peter [Chardon Brooks’s] property in half, it was much less intrusive than the image implies. The canal was narrow,… at or below grade and — most importantly — completely silent. It was this latter quality that left the pastoral landscape virtually untouched and, in the minds of many, enhanced.

Peter treated the canal like a landscape element, planting hedges along its western bank and later constructing a graceful, single-arched bridge over it. The Canal Company had initially built a wooden bridge where a road leading from Peter’s house to his farm had been cut in half, but in 1821 Peter replaced it with an arch of Chelmsford granite, paying the cost of $1,000 himself. The new bridge, which spanned what is now Sagamore Avenue where Sagamore Park intersects it, was widely regarded as an architectural gem due to its simplicity and elegance. It was one of the earlier designs of George Rumford Baldwin. . .

The Canal Company was understandably pleased that Peter had built and paid for a new, low-maintenance bridge at the site. With this in his favor, Peter asked for and received permission from the Canal Company to transform the shore of the Mystic Lakes from his property to beyond the Parting [of the lakes] into a “pleasure ground.” By adding paths and grooming the surrounding woodlands, Peter turned the area between the lake and the canal into one of striking beauty.

The Canal in Winter and Summer

The Middlesex Canal in winter was very unlike the river. There was no danger in its currentless four foot water; no unfrozen margin. It always froze smooth and early, so that we were sure of skating on Thanksgiving day . . .

West of Main street the winter canal was nicer. It generally was in sight of the river and, for a long stretch, of the Walnut tree hill on which no Tufts College or anything else stood, though I seem to remember the lone walnut tree. Beyond the aqueduct and through the woodlands it was ideal. The heavy oaks kept off the wind. We could look down upon the lovely lake which at times was very near the canal and perhaps twenty feet lower. We could climb down the slope and explore on our skates all its nooks and bays. Some distance above the “parting” there was an apron of plank, the wasteway for the surplus water of the canal. This made a handsome cascade as the water tumbled over the rocks right into the upper pond. . . .

In the summer the canal was delightful also. No place could be more beautiful that the mile or two of its passage through the lake woodlands. The great boats never charged us passage money and at every bridge one could step on or off a boat. . . . With the eyes shut you could not say there was any motion. The boatmen never bothered us. They had little to do but talk. Theirs was in general easy service. The long tow had the horse at one end, and the other was made fast to the top of a slightly elastic pole which stood near but not quite at the middle of the boat’s length. Its exact position was scientifically important, for if it was rightly placed the boat would keep the middle of the water, and only at approaching a bridge or another boat did the boatman need to lean against his enormous steering oar.

The fishing in the canal must be noticed. Pickerel were there, and the troller had an easy time loafing along the tow path from which he could cover all the water. Smaller fish were numerous at certain spots, notably at the Lowell railroad bridge which crossed the canal near the arch over the river. Here were beam, perch, shiners, etc., but no pouts. The pouts were about ten feet south of the canal in a little pond at the angle of the railroad and canal. and there they were plenty … 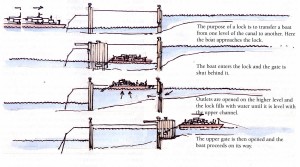 The pleasantest and most productive of the fishing places was at and near Mr. Brook’s granite arch. . . . The arch was perfect in its absolute simplicity A gravel path from the Brooks mansion led over it and onward along the west bank of the canal to the nearest part of the lake where was Mr. Brooks’ grove extending from the canal to the lake, full of similar trees of great size, and with pretty paths and two little stone arches over a bit of the brook which flowed down to the lake. We did not fish in the canal beyond this, but the cool shadow of the granite arch, where no sun ray ever came, was with the adjoining tree shadows, a favorite home of many kinds of fish. Besides the striped perch and bream, we there took cheven, a rather larger fish, all silver and resembling a scup, suckers large enough if not very good, and chub. This last had large silver scales with a sort of purple iridescence, and would sometimes weigh a pound. They were very good eating too. Another beautiful fish was found at this bridge and only here. It was about as large as a small smelt, silvery but with crimson tipped fins and tail.

The Medford Historical Society celebrated during the 1996/1997 season one hundred years of preserving the history of Medford. Among many other events marking this special occasion, The Society sponsored a book recognizing the bicentennial of the Middlesex Canal. The information above is from this book.