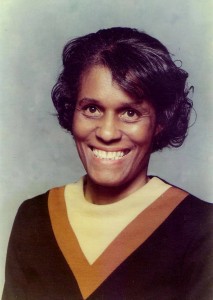 Madeleine Dugger Andrews was born on December 13th, 1922 to Lieutenant Colonel Edward Dugger and Mrs. Madeline Dugger Kelley of West Medford, Massachusetts. She was the third of their six children. As a young girl, Madeleine was a serious student and a passionate athlete. Her father, Edward Dugger, passed away in 1939, when she was only 16 and the family finances were very tight. Her mother, however, made it a priority that all her children go to college.

Madeleine attended Bridgewater State College from 1940 to 1944, catching a series of buses from Medford at six-thirty each morning for a two and a half hour ride. After classes each day she worked in a burlap mill to bring in extra money, and did not return home until late at night. She graduated with a B.S. in Education.

Madeleine married Edward Andrews, an Arkansas native and member of the 366th Infantry. The couple eventually settled into a home on Arlington Street in West Medford and had three sons, Edward Jr., Mabray, and Malcolm. Madeleine was a caring and supportive mother, taking her sons on trips into Boston and teaching them the importance of education, as had her own mother before her.

When she began her teaching career, Madeleine keenly wanted to teach in her own city of Medford. When she applied for a job, however, Medford’s School Superintendent turned her down solely because of her race. After this refusal, she taught in the Boston School system, returning to Medford twelve years later as a substitute teacher.

In 1963, while she was teaching at East Boston High School, the West Medford Improvement Association approached Madeleine with a request to run for Medford’s School Committee. Although no African American woman had ever successfully run for such a position, either in Medford or in the state as a whole, Madeleine agreed to try. Her campaign, which focused on the need to open Community Colleges and to reduce the dropout rate in Medford, was successful. Once elected, she focused her efforts on implementing a program to recruit high-quality teachers (especially teachers of color), creating a racial balance plan for Medford schools, evaluating school building needs, strengthening the existing guidance program, and initiating a skills-training program for students who did not wish to pursue higher education.

While she was on the Committee, Madeleine went back to College. She earned an M.A. degree in Guidance from Boston State College in 1966, and began work in Roxbury, Massachusetts as a Guidance Counselor specializing in curriculum design.

Religion always formed a prominent part of Madeleine’s life. She was actively involved in West Medford’s Shiloh Baptist Church, and participated in many aspects of church life. Madeleine’s faith was important when she was faced with declining health. During her fourth term on the School Committee, Madeleine was forced to resign because of an inherited kidney condition that required her to get frequent dialysis treatments. Despite the care and support of her family, Madeleine passed away in 1986.

Madeleine Dugger Andrews lives on, however, not only in the thoughts and memories of those who loved and respected her, but also in the name of a school-a school of which she would have been very proud. The Madeleine Dugger Andrews Middle School for grades 6-8 was constructed in 2000, one of Medford’s first new schools to be built in almost 80 years.