You are here: Home › Medford History › About Medford › Medford Rum

Invented in the West Indies in the 17th century, rum caught on in the American colonies, where distillers began importing molasses and quickly created a major industry. At its peak in 1770, the colonies imported six million gallons of Caribbean molasses, much of which became rum in New England’s 159 distilleries. NYTimes

The Best Rum in the States 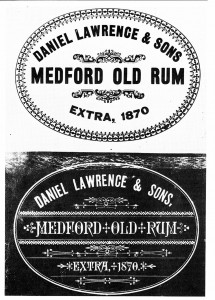 If you were in the Square on a November night in 1860 and happened to be near the distillery of Daniel Lawrence & Sons on Ship Street (now Riverside Avenue) you could smell something wonderful in the frosty night air: XXXX Old Medford Rum. If you were a shipwright on the way to work the next morning, you would probably stop at the barrel of free rum kept outside the door of the distillery and put the tin dipper placed there into the rum and have a drink of that delightful stuff which the advertisements of the Lawrence family called: “the best rum in the states.”

Medford rum made by the Lawrence family was famous in its day, but early Puritan families were the first to make rum in the town. In the 17th and 18th centuries, most rum would have been produced for domestic consumption. Many would have had stills in their homes and made alcohol for “medicinal purposes,” but there was always some to serve to neighbors and visitors including the preacher. It would have been inhospitable not to do so.

John Hall was the first to make the production of rum a business in the town. Sometime between 1715 and 1720 he operated a business on land he owned on the north side of Riverside Avenue. He built a still over a spring on this site, brought some hogsheads of molasses, and old Medford rum hit the marketplace. In 1735 John sold the establishment to his brother Andrew who carried on the business until his death in 1750. Benjamin, his son was nineteen at his father’s death and was working in the Still House When he became twenty-one, he took over the business and operated it for the next fifty-one years. In 1797 the wooden building was taken down and the familiar brick one seen in photographs was erected.

Some of this rum would have been sold overseas — some to African slave traders in what was known as the triangle trade: merchants sent rum to West Africa in exchange for slaves to be sold in the Caribbean; there, sugar and molasses were bought and shipped to New England for the making of rum. See our collection of Slave Trade Letters for context – a collection that came to MHSM through the Hall family papers.

Until the coming of the railroads, there was almost always a bark next to the wharf near Mistick bridge unloading raw molasses for the distillery. In 1777 Medford rum sold for 3 shillings and 10 pence a gallon. Apparently there wasn’t much profit in the business at this price. But rum continued to be made and other distilleries were opened, mostly on the northern side of the Mystic where the land was higher and less likely to be flooded during high tide. Once at Isaac Hall’s distillery the vats were filled and ready but the tide overflowed, and salt water entered the plant and ruined the molasses.

About 1790, John Bishop built his distillery directly across the street from Benjamin Hall’s distillery. Its back door was on the wharf where the ships brought in the hogsheads of molasses. And Hezekiah Blanchard had a small plant on the south side of the Mystic River where the Mystic Valley Parkway runs today. These are just some of the Medford names associated with rum. 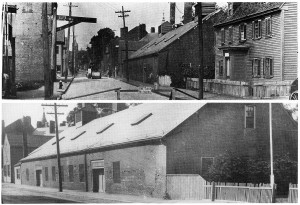 Above: Riverside Ave. under construction at River Street showing the Distillery where Medford Rum was made. Looking towards Medford Square.
Lower: Closeup of the Distillery (built in 1797).

After 1830, however, there was no competition in the making of Medford rum. There was only one firm making this famous rum and it bore the name of the Lawrence family.

Daniel Lawrence had come from Tyngsborough, Massachusetts, to Medford in 1823. He became involved in John Hall’s distillery and eventually took over the business and continued it under his own name. The name was to become famous. The rum was choice and rich for the standards of the firm were high. The aim of the Lawrence distillery was to deliver a racy rum made from the best grade of molasses which would give “splendid satisfaction.” That it did. Medford rum went round the world, often in the very ships built in the town. The rum industry provided jobs for many of Medford’s citizens. Ships, bricks, and rum; they added up to prosperity for the town.

Shipbuilding came to an end in 1873 and Medford rum almost became extinct a few years later with the death of Daniel Lawrence in January, 1879. According to his will, the business was to be closed down in 1880, although it wasn’t. Instead, his sons, Samuel Crocker and Daniel W., carried it on for another twenty-five years. And then it was closed, suddenly and unexpectedly. Medford was celebrating its 275th anniversary in 1905. During this celebration, on June 15th, the Lawrence family made it known that the distillery was going to be closed. No reason was ever given.

It is a fact that many Protestant churches, because of their temperance views, felt that rum making was a “blot” on the reputation of the city; thus when Samuel C. Lawrence had run for mayor 13 years earlier they had endorsed his opponent. This apparently had surprised him, as did his close victory in that race. Whatever the explanation, the making of Medford rum came to an abrupt end. Some people in Medford may have been happy but those who lost their livelihood and those who loved the taste of good old Medford rum were not among them.

According to lore, the day after this dramatic announcement, the price of Medford rum went up and there was a rush to lay by a supply of the “old stuff” by those who knew its value. Old Medford Rum had become the oldest spirit brand in the industry and the Lawrence family sold the right to the name Medford Rum (but not the secret of how to make it) to the M.S. Walker Company of South Boston. The huge copper tanks in which it was brewed were sold to a distillery in Everett and in 1933 sold again to a Charlestown firm. None make the “Old Medford” brand anymore, and if you find an old bottle for sale, it is likely a “branded” label and not from the original distillery in Medford. In 2013, GrandTen Distilling branded their own called “Medford Rum” and gifted MHSM with its first brew.

You can see a small exhibit of rum bottles and equipment at MHSM. 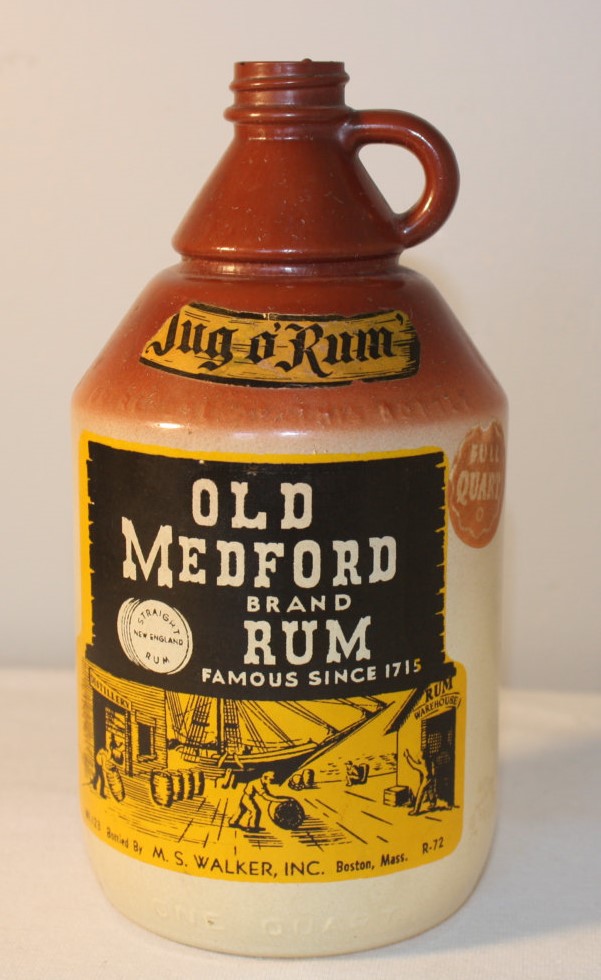 Based on From Medford on the Mystic. By Carl Seaburg and Alan Seaburg. Published by The Medford Historical Society, April 1980 and the NYTimes 30 October 2012.