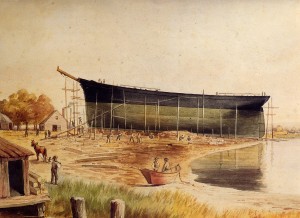 Construction of the ship Pilgrim, the last ship built in Medford as remembered by Fred H. C. Woolley.
Gift to the Medford Historical Society from his niece Helen Packard.

The shipyards were a lively schoolyard for Medford boys and girls in the nineteenth century. The streets of the town were filled with excitement. Long tandem teams of horses flew past loaded with timber that had come down from the north over the Middlesex Canal or the railroad. They were something to see and remember.

The yards themselves were filled with smells and wonderful noises. Broadaxes swung, mauls sent home spikes, bolts and trunnels, one man called to another: “Hot plank here.” There were melting kettles of pitch and tar and tallow. The tar was like chewing-gum and anyone could help themselves to it. And if one had a good sense of smell he could recognize a yellow pine from a white oak.

One could watch a vessel laid from keel to frame, could see the ship-joiners mark out the cabins and state rooms. And when the ship was complete, when it was ready to be launched into the sweet Mystic River, and the day was very lucky and the school gave a half holiday, a boy could watch it all. James Hervey remembered such a day when the 828 ton St. Petersburg was launched in 1839:

How beautiful the brightly painted ship, with her graceful outlines, appeared to me, and with what a thrill I saw the last block knocked away, and the slowly increasing movement of the mighty mass! I can still see the hundred stalwart men on the shore manning the great hawsers, checking and guiding the vessel as she swings into the stream on her way to the wharves of Boston. 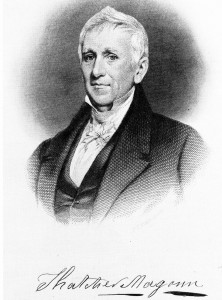 No wonder Thatcher Magoun chose the shore of Medford and the Mystic River to build his ships. He recognized the fact that the Mystic was a natural place to build ships. And with the opening of Middlesex Canal it was possible to bring to the town at very low cost timber for shipbuilding.

Magoun was born in Pembroke, Massachusetts on June 17, 1775, the very day of the battle of Bunker Hill. When he was old enough, he became a ship carpenter and worked for Enos Briggs in his Salem yard for five years. Then he moved on to Charlestown and Mr. Baker’s yard (the old Navy Yard). He stayed for two years. Here he made a model of his first ship (the Mt. Aetna) and here he decided to go into the shipbuilding business for himself.

He saw in the Mystic River and Medford where he lived an opportunity. It had favorable tides, there was a good depth to the river at high tide, and the shore and the bed of the river were free of obstructions. “Twice a day the tide surged in from the ocean, mingling its odor of brine with the pungent smell of molasses from the distilleries, and overflowed onto the whispering marshes, making at full tide enough depth of water to float an empty ship of twenty-five hundred tons.” Nearby were good oak groves, the Middlesex Canal made it possible to get timber from the upper Merrimac area (there was a tide lock which could be used by rafts to bring the timber into the Mystic). Also important to the new businessman, the land was cheap, and the men were available to build the ships. 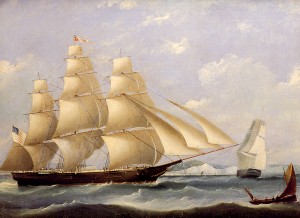 So Magoun established the first shipyard in Medford. It was on Riverside Ave. (then called Ship Street) opposite the end of Park Street. In 1803 he laid the keel of his first vessel, the Mt. Aetna, the model of which he had made a few years before. He built ships here until 1836 and eventually his yard was to be the only one in Medford with a shiphouse. He built 84 vessels, and they made him a rich man.

Magoun “specialized” in big ships and brigs, 250 tons and larger, built for the China trade. His reputation according to the maritime historian. Admiral Samuel Eliot Morison was “second to none among American shipbuilders.” He first lived in a house on Park Street, but with the money he made he was able to build a grand mansion on High Street which eventually became the town library. He was remembered in his later years as “portly and dignified.”

If Magoun was the first shipbuilder, others soon followed, and they made Medford and Medford-built ships famous for three-quarters of a century. Medford ship men included: Turner, Lapham, Sprague, James, Rogers, Stetson, Waterman, Ewell, Curds, Foster, Taylor. They were a special breed and led important lives. 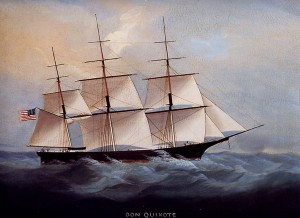 These Medford ship men built their vessels in ten yards in town. The fortunes of shipbuilding varied with the times: there were the good years, there were lean periods. Before the War of 1812, only a few ships were constructed in Medford. In the 1830’s there was a shipbuilding boom all along the northeastern seacoast.

The Maine yards on the Kennebec River, the St. George and the Penobscot Rivers sparked the building of ships. These Maine shipyards offered real competition to yards like those in Medford. But Medford men were equal to the task. They “quietly evolved a new type (of ship) of about 450 tons burden which, handled by eighteen officers and men, would carry half as much freight as a British-Indianman of 1500 tons with a crew of 125, and sail half again as fast.” Most owners wanted ships that could do all kinds of work and the “finest type” then being built was the Medford or Merrimac East Indianman. An example would be the Columbiana built in Medford in 1837, or Jotham Stetson’s ship the Rajah, 531 tons, 140 feet long which was constructed in the previous year.

By the 1850’s there were about 350 men working in the Medford yards, “one fourth of all the shipbuilders employed in Massachusetts.”

Work began when the sun rose and ended when it set. Sixty men usually were at work building one ship and if it averaged 1000 tons it took about six months to build. Wages for carpenters, caulkers, and outboard and inboard joiners were two dollars a day. Their apprentices earned 40 to 50 dollars a year plus their board. 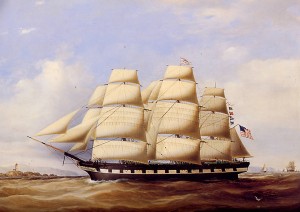 The building of clipper ships added to Medford’s renown. The first one launched was The Shooting Star. As Admiral Morison points out, ships built in Medford by the firms of J.O. Curtis, Hayden & Cudworth, S. Lapham “have more fast California passages to their credit, considering the number they built, than those of any other place.” That is quite a record.

All together, there were 568 ships built in this town, of 272,194 tonnage; the average was 490 tons – at a value which was estimated to be $12,500,000. No wonder there is on the seal of the city a representation of a ship about to be launched into the Mystic River. The largest ship ever constructed on these shores was the Ocean Express of 2,000 tons which was built in 1854 by the yard of James 0. Curtis. In the years between 1850 and 1855, 35 vessels were built here, each over 1000 tons. The most rapidly built Medford ship was The Avon of 400 tons built in just 26 days. Shipbuilding officially came to an end in 1873 when the last Medford ship, the Pilgrim, went sliding into the Mystic. Foster, who had the last Medford yard, went into – appropriately enough — the retail lumber business when his yard was closed.

The last ship launched in Medford was the Pilgrim in 1873. Among ship owners of the day, “Medford-built” came to mean the best.

There were reasons why the building of ships stopped in Medford. The signs were there during the last ten years, 1863 — 1873, when only 14 ships were built. The wooden ship was becoming obsolete; it was being replaced by steam-powered iron vessels too big for rivers like the Mystic. Furthermore, it was cheaper to build ships in foreign ports than in American ports. Thus shipbuilding, once a proud Medford activity, passed intc history. Never again would Medford boys or girls have a half holiday from school to watch a ship launched into their river. But they had been good days and they would never be forgotten.

The ship illustrations on this page are some of the many ships built in Medford. Originally published in 1996 in the 100th Anniversary Calendar of the Medford Historical society, they are from the collection of a private citizen who wishes to remain anonymous, but has generously allowed the Medford Historical Society to photograph them to put them on display in the City Hall and the public schools, and to feature them here.