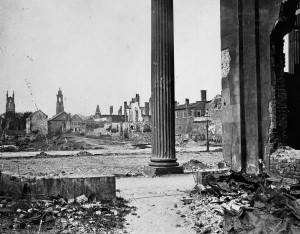 Ruins of Charleston, South Carolina, 1865.
No Confederate city held such symbolic value as Charleston, South Carolina. It was where the first shot of the war was fired, and the Union expended great effort and thousands of lives to capture it. But Charleston held out until the last months of the conflict, when Sherman’s advancing forces compelled the evacuation of the Confederate garrison. By 1865, bombardment and fire had ravaged the once elegant city.

The Medford Historical Society & Museum presents its large and significant collection of Civil War photographs.  They were donated in to the Society in 1948 and in an exciting turn of events, rediscovered in 1990.  This was the collection of Samuel Crocker Lawrence, a Civil War general, Medford’s first mayor, and generous benefactor to the city.

There are 3,693 albumen prints in three size categories: ranging from large-format battle site landscapes, carte-de-visite studio portraits, and “half stereographs” which are stereograph views, unmounted and cut into two images .  Many are identified and both sides of the photographs are shown. The images remain in unusually fine condition. They have largely escaped the fading common in albumen prints for two reasons: they were rarely exposed to light, and most were never mounted which spared them contact with the destructive impurities of low quality cardboard and adhesives. In addition, some prints were made before the delicate glass plate negatives developed cracks or emulsion loss which show up in later prints.

The importance of this collection lies in the content of the images, their artistic value, and as an example of early photography. Upon rediscovery of the collection, some of the photographs were exhibited and written about. Now in digital form, the full collection can be shared with the public for the first time.

The Story of the Photos and their Rediscovery

In 1916, the society moved into its present headquarters at 10 Governor’s Avenue. After many years in storage, the collection resurfaced in 1990. The collection was amassed by General Samuel Crocker Lawrence (1832-1911), commander of the Lawrence Light Guard during the Civil War and the first Mayor of the City of Medford in 1895. 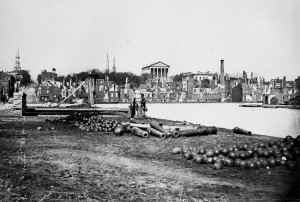 Ruins of Richmond, Virginia, from the Canal Basin, April 1865.
A Federal soldier stands beside abandoned Confederate ordnance following the Union occupation of Richmond, in April 1865. The columned portico of Virginia’s state capitol, which also housed the Confederate Congress, overlooks the James River canal basin and blocks of fire-ravaged homes and businesses.

Upon General Lawrence’s death, in 1911, the collection passed into the custody of the Light Guard, and in 1948 Colonel John J. Carew of the guard and Mrs. U. Haskell Crocker, General Lawrence’s granddaughter, donated the chest full of photographs to the Medford Historical Society & Museum.

When The Boston Globe and Civil War Times Illustrated announced the discovery of the Medford collection in 1990, the society received many requests to examine or purchase the photographs. Gordon Baldwin, of the Getty Museum, wrote that “the Medford hoard of photographs is without doubt one of the most important collections in this country of prints made from the original negatives of some of the most important photographers of the Civil War.” 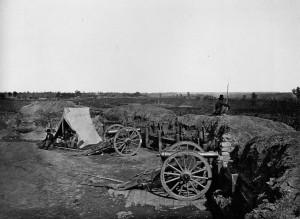 Former Confederate Works in Front of Atlanta.
A group of Union soldiers relax in their canvas tent while a comrade guards the rampart of a captured Rebel bastion in the defenses of Atlanta. Sherman’s grizzled veterans were poised for the next step in the Union’s effort to destroy the Confederacy: the March to the Sea.

The initial Civil War Photo committee (including Dr. Carl Seaburg, Stephen Johnson, Carol Sbuttoni, Jay Griffin, Michael Bradford, Noah Dennen, and Dr. Valeriani), agreed that the collection should remain in Medford, and be made available to Civil War scholars after the photographs had been properly conserved. Although the photographs were visually in superb condition, most of the albumen prints had never been mounted on cardboard, and many of them had curled and needed careful physical conservation.

The Society raised funds to begin the effort of conservation, and nine hundred were conserved at the Northeast Document Conservation Center in Andover, with income from the book Landscapes of the Civil War (1995) used to continue the conservation effort.

Other than a small exhibition at Tufts University during the inauguration of President John DiBiaggio, Landscapes of the Civil War was the first public opportunity to see some of the remarkable photographs in the collection.

In 2009, the Society mounted an exhibit entitled: “Of the People: Faces of the Civil War” curated by Jim Kiely.  The exhibit marked one of the few public exhibits of photos from the collection, and the first of its portraits.  Timed to coincide with the 200th birthday of Abraham Lincoln and the inauguration of the nation’s first African-American president, the exhibit captured the diversity of people engaged in the Civil War, and the social and moral  ambiguities of the war itself.

Between 2013-17, Allison Andrews and a team of volunteers committed many hours to cataloging every image in the collection. In 2019, with the persistent work of Digital Commonwealth, the photography were finally  scanned and made available to the public. There are 3,693 albumen prints ranging from large-format battle site landscapes to carte-de-visite studio portraits.

Additional landscapes from the MHSM Civil War Photo Collection can be found here.


Text is from Landscapes of the Civil War. Edited by Constance Sullivan. Published by Alfred A. Knopf, New York 1995.