Additional photos from the collection.

For questions about the collection email cwphotos@medfordhistorical.org 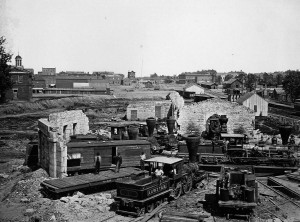 Ruined Roundhouse, Georgia Railroad, Atlanta, l866.
Locomotives parked surrealistically amid the shattered remnants of Atlanta’s Georgia Railroad roundhouse testify to the devastation wrought by Sherman’s relentless campaign. Before embarking on his March to the Sea, Sherman ordered the evacuation of Atlanta’s civilian population and destroyed the city’s transportation infrastructure. 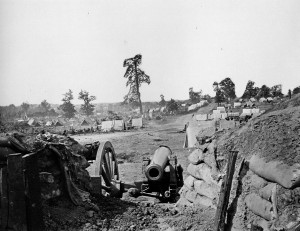 Cannon in Former Confederate Works, Atlanta.
Positioned in the embrasure of a former Confederate earthwork, a Union cannon guards an encampment of General Sherman’s victorious Yankees following the capture of Atlanta, Georgia. The fallen city is visible in the left background of George N. Barnard’s photograph. 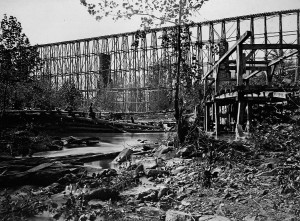 Trestle Bridge at Whiteside, Tennessee.
In 1864, Union engineers spanned the vally of Running Water Creek near Whiteside, Tennessee, with a 780-foot-long railrood trestle. Photographer George, N. Barnard, who was employed by General Sherman’s chief engineer, made this view of the delicate-looking structure. 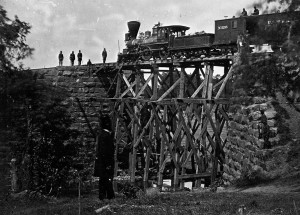 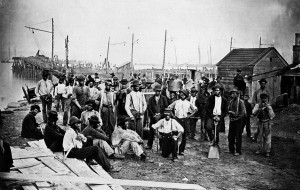 Laborers at the Alexandria Wharf.
The contribution of African-Americans to the Union war effort was substantial. While nearly two hundred thousand black soldiers and sailors served in uniform, many others worked on the wharves and at the railroad depots that supplied Northern forces in the field. 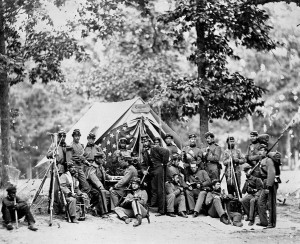 
Text is from Landscapes of the Civil War. Edited by Constance Sullivan. Published by Alfred A. Knopf, New York 1995.