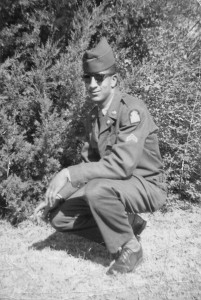 Mr. Edward “Buddy” Clayton, the first African American Postmaster from Medford, was born in Cambridge on November 11, 1928. He moved to West Medford with his parents, Henrietta and Lloyd, when he was two years old. For the rest of his life he remained in West Medford, living in many residences but always staying on two streets, Jerome Street and Arlington Street, where he resides today in the home he built in 1960. While Mr. Clayton remains humble about his achievements, he made an impact as a pioneer and opened the way for others to follow him into positions of considerable responsibility. As a young boy, “Buddy” attended the Hervey School in West Medford, then the Brooks and Hobbs Schools, and finally Medford High School, from which he graduated in 1946. As he was growing up, Buddy got to know a young girl called Caroline Isaacs, who lived on Jerome Street. In 1950 he married her. They were to have three sons, Steven, David, and Peter. In the same year that they were married, Buddy enlisted to serve in the United States Army, leaving West Medford in September 1950. During his time in the service he attended medical school in Fort San Houston, where he was certified as a service technician. He worked in the medical corps in army camps in Wisconsin and Indiana, and was discharged in 1953. With his service behind him, Buddy returned to West Medford. At the time of his discharge jobs were difficult to obtain, and were especially limited for African Americans. Buddy did not wish to pursue the career in hospitals that he had mastered in the service, but the Civil Service was accepting veterans. After a long wait, he was hired by the United States Postal Service. In the Post Office he often encountered prejudice, but his years of hard work prevailed and he was promoted to Supervisor after seven years. This represented a considerable achievement. As Mr. Clayton recalls,

[A]t times I used to go to meetings-the Managers’ meeting-and I would be the only African American there. …[Y]ou say to yourself, “With a 14, 16 per cent workforce of Afro-Americans, why there were not more supervisors,” you know? But then as it went along it got better. And then…at one time there were ten Afro-American supervisors in the Post Office that lived in West Medford.

Buddy’s promotion had made it easier for other people of color to follow him into managerial positions. When he became a Manager in 1973, Edward Clayton was in charge of several post offices in different parts of the Boston area, with numerous employees, and was on call 24 hours a day, seven days a week. In addition, he worked other jobs in order to support his family. He was called in the middle of the night to deal with post office fires and floods, and encountered several situations that threatened his safety. During the Blizzard of 1978, he walked and shoveled through deep snow to keep the main Medford Post Office open. In the same year, he was made Postmaster of his own city, in charge of 65 mailmen. He was then made Area Manager in 1981, with fifty post offices reporting to him. Through his strong work ethic and his dedication to his family, Edward Clayton has served as a role model, both for his sons and for the community more broadly. In 1981 the whole Clayton family was honored with Medford’s Family of the Year Award. Buddy remains a respected figure in Medford, contributing to the city through his involvement in sports, through his church, his band, and as an oral historian with vivid memories of the West Medford community in times past.