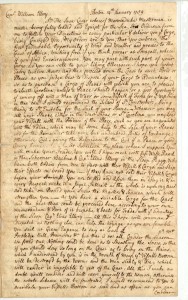 In The Snow Caesar whereof Marmaduke Master-man is master being fully loaded an Equipt for the Sea, His Orders are from me to follow Your Directions in every particular & deliver you & Cargo being Consign’d you. My Orders are to you that you embrace the first favourable Opportunity of Wind and Weather and proceed to the Coast of Affrica, touching first if you think proper at Sinagall, where if you find Engouragement, You may part with such part of your Cargo, as you can sell to your liking. Otherwise I hope you won’t Tarry twelve Hours, and then proceed down the Coast to such Ports or Places as you judge best to Dispose of your Cargo to Advantage So as to purchase a Cargo of Slaves with which you are to proceed to South Carolines, unleSs a Peace should happen, or a good Opportunity of coming off with a Man of Warr, or some VeSsell of Force for ye West Indies in that case I would recommend the Island of St. Christophers, being Handy to St. Eustatia for the Sail of your Slaves_Wherever you may sell your Slaves, wither in the West Indies or S° -Carolina, you may Load your VeSsel with the Produce of the Place, such as you are acquainted with the Value, which may be of some help to the Sale of your Slaves and for the Remainder take not but undoubted Bills of Exchange, Otherwise Cash = giving the Referrence to the Cash if a Peace of good Convoy home. At’ Surreleon the place where I suppose You will make Your Trade You will I hope meet with Capt: Walter Rand in the Schooner Bachus & Capt Elias Ellery in the Sloop Peggy, who have both Orders from me to part with their VeSsel & Cargo’s, & Ship their Effects on board You._ if they have not sold their VeSsel & Cargo’s before your Arrivall, you are to Aid and ASsist them in doing it & in every Respect, make it a Joynt Interest as the whole is upont my AcctL and take on Board your Snow the Masters & Seamen which will strengthen you__ as you have a suitable Cargo for the Coast and the best that could be procured here according to your own memorandum & Part of is bespoke & boats for Trade with ye advantage of the Sloop Capt. Elias Ellery__all this I hope will command Dispatch as Nothing else can help the Voyage as you are Sensible you sail at Great Expence to Say at least L.____per month, Protledge Bill, Provisions etc. but that is not all. 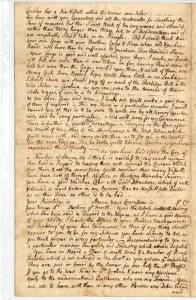 Consider the Season we fitted out. Nothing could be done as to Sheathing the Snow, so that if you should Lay so long on the Coast as to bring on the Rains, which I understand by you is in the Month of May, ye VeSsells Bottom will be Destroy’d by the worms and the men sickly & Die, which will render it impossible to gett off the Coast; All this I make no doubt you’ll consider and will exert yourself to the Utmost; otherwise the whole Scheme will be frustrated, I would recommend to you to overhale your VeSsells Bottom as soon and as often as you can. Consider he a New VeSsell which the worms soon takes_______You have with you Carpenters and all the Materialls for sheathing the Snow if required, but tills I can’t think of by any means, and should rather than tarry longer than May, sell to a Disadvantage, and if not compleatly Slav’d, take in on Freight_ _ Tho I should think that your own Cargo with your Brothers Cargo & Sloop when sold & perhaps Rands, till more than be sufficient to purchase Two Hundred Slaves. Your Cargo is good and well aSsorted, your Rum I make no Doubt will hold out more than it was taken in for, have Prov’d some to hold out more than the Gage mark’d upon them, & as all of them are Strong Cask Iron Bound, hope you’ll have little or no Leakage. I should chuse you should pay off as much of the Portledge Bill in the West Indies or Carolina as you can, even to the amount of their whole wages, if can do it to advantage___ ___ ___ As you have Guns and men, I doubt not you’ll make a good Use of them if required. _This one Thing in particular manner I would remind you of, that is to be sure to write me by all & every opportunity, and be very particular,__which will serve for my Government. There is further a greater Disadvantage in Tarrying on the Coast after the Month of May, that is the Hurricanes in the West Indies, which you’ll meet with, and being so late there as to fitt out in the winter for the Next Voyage. This no doubt you’ll likewise Consider as you have experienced the Difficulty___
As you have had often the Care of a Number of Slaves, So I think is needleSs to say much upon that head in Regard to keeping them well secured & a Constant Watch over them, & art the same -time you’ll consider that many VeSsells have been cutt off through Neglect or thinking themselves Secure_ _ You have a good medicine Chest with Good Directions, which if well followed, is much better in my Opinion than an unSkillfull Doctor as at this Time no other is to be had____ Your Priviledge is Slaves, your Commissions is per cent. Your Wages L. Sterling per Month__. Upon the whole notwithstanding what has been said in Regard to the Voyage, as I have a good Opinion of your ability, I leave the Affairs to your Prudent Management not doubting of your best Endeavours, so that if any thing should appear to you to be for my Interest you have Liverty to Act, as you think proper in every particular__ Recommending to you in a particular manner Frugality and Industry which attends Dispatch__You have on Board a Chest of Small Arms & a Number of Brass Kettles, which is not included in the Inventory as you esteem unsuitable. They are put on board by the Owner of one half the Proffit, If you go to the West Indies or S°-Caroline & want any Assistance, apply to the undermentioned Gentlemen who are my Friends._ You are not to leave with them or any other Persons any Debts behind, 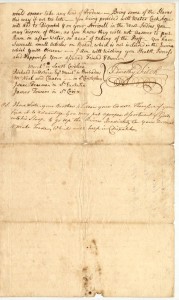 would sooner take any kind of Produce__Bring some of the Slaves this way if not too late__You being provided with Water Cask, hope will add to the Dispatch & on your Arricall in the West Indies, you may dispose of them, as you know they will not answer to put Rum in after waiter, on acco’t of taking of the Proff.__You have Severall small Articles on Board, which is not included in the Invoice which you’ll Observe__I am with wishing you Health, SucceSs, and HappineSs Your aSsured Friend & Owner
Timothy Fitch
Merchants in South Carolina
Richard Wiltshire Esq. Mercht. in Barbadoes
McNeal and Claxton ____ in St. Christophers
Isaac Freeman in St. Eustatia
James Towers in St. Croix
P.S. I have Wrote your Brother to follow your Orders Therefore if you find it to advantage you may put a proper assortment of Goods into his Sloop to go up to River Imediately on your Arrival to make Trade, which will keep in Dispatch. 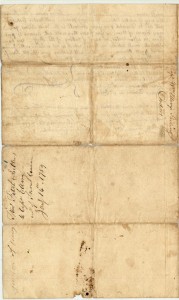